Today, at approximately 4pm SLT, an announcement was made inviting the press and parents for an open conference at 5pm SLT.

I immediately crawled out of my sick bed, clutching my belly and got myself dressed up. Being a child advocate, it was imperative that I be there. In addition, my nephew, Siddy, and nieces, Poppy and Sami, were some of the children headed to Disney on that flight.

It’d been a horrid near 48 hours of not knowing what was going on, and by now I was beyond enraged. Outrageous! How could a plane full of kids get lost over the pacific (shark infested) ocean and not result in immediate and desperate actions from the authorities?

I muttered as I got myself ready to head to the airport, chattering to myself things along the lines of “What sort of country do we live in where a lost plane full of children is not given the most absolute of priorities?” That reality had me enraged as I parked and made my way into the airport’s lobby where a spokesman for NGI Airways stood calmly behind the podium. 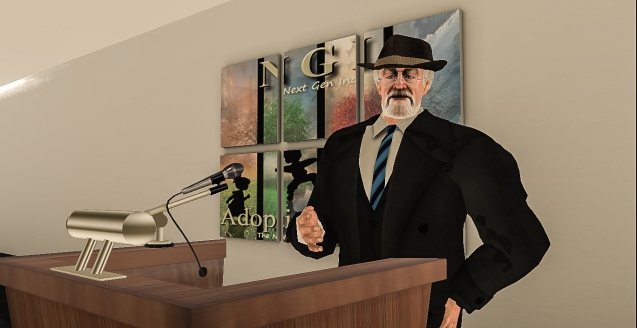 The clock struck 5pm and there we were, waiting! I let it slip immediately that we’re waiting and needed answers, but received no response from the stone faced representative. 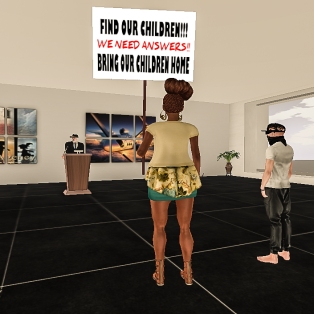 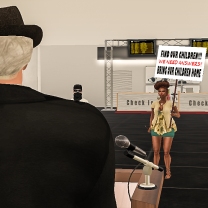 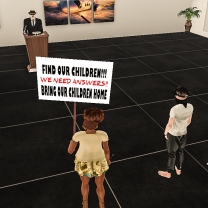 It was evident he was a paper pusher that had been given a set of responses on paper that he couldn’t deviate from, and that annoyed me all the more. Nevertheless, we waited!

Ten painstaking minutes later, he cleared his throat and began his statement, which I filmed for posterity.

Good evening ladies and gentleman. I will first give you details of the incident and then I will answer questions.

At approximately 3:00pm SLT Saturday afternoon. NGI Airways Flight 13 en route to Disney with 130 passengers including 13 crew members made a mayday call. 12 seconds after that call came in air traffic control lost contact with the aircraft.

ATC made several attempts to reestablish communications with the aircraft. But all attempts failed

At approximately 3:15PM an emergency response was put into action. We do not know at this time the cause of that mayday call.

The US Coastguard and US Navy SL have several response teams in the area where the plane was last believed to have flown over.

They have established a 50 mile radius to search and will expand that if needed.

We assure you that we are doing all we can to bring your children home.

Dead or alive, We will bring them home.

It was at this point that he stopped to take questions, and good that he did because I was boiling with rage at this time. In a fit of frustration, I heckled along with others, “NOT GOOD ENOUGHHHHH!”, then  the roar of the crowd began. A mother yelled out in sarcasm “You mean i get to PICK??” Another, “did you just say dead?” Gasps and cries filled the room. 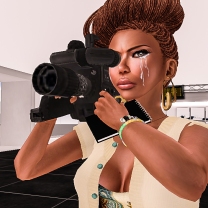 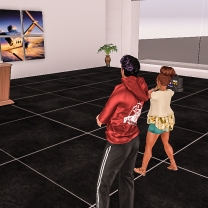 “Dead or Alive! Hmmm….Dead. or. Alive.” That’s what he just said, I was talking to myself! As I pondered that, letting it seep in, hundreds of hands went up with questions. People were crying inconsolably, overwhelmed with emotions thanks to the flippancy of his final statement.

A little girl stepped forward and asked, “what if they are eatten by sharks what then?” We all paused for an answer from the spokesman “There are believed to be a heavy white shark population in the area. Next question.” Everybody gasped or exclaimed in some way. He was being dismissive. You could tell he was beginning to sweat, but we needed real answers!

“Do your planes not have a distress beacon?  How could you lose radar contact??”, was another question from a very concerned dad in the crowd, with evidence of tears in his eyes. No one looked like they’d had much sleep. “It does have a distress beacon. However we have not been able to find it in our radars….they have completely dissipated. Next question.” was the response from the still dismissive NGI Airways spokesman.

Despite raised hands, I angrily interjected, blurting out, “At which POINT are they deciding to expand that radius? When they have all been killed? Or drowned??? It’s been TWO WHOLE DAYS. This is an outrage!!!!!” Everyone concurred. He was not going to be dismissive with me, I thought, with my anger and emotions very clearly displayed on my sleeves. At first he attempted to ignore me and looked on to someone who had their hands raised, but I stood my ground and moved forward with my camera. He responded with “We do believe they will expand the search area within 24 hours. Next question. You, The young lady in the gray shirt.”

I was flabbergasted! He’d managed to just brush past me. I let the lady ask her question, “What kind of supplies where there with them? Was there a doctor maybe on the flight or a RN? What if someone is hurt?” to which he responded “Unfortunately there were no supplies on the plane other than the luggage and even so we believe the plane has been destroyed! Next question!”

How can this be? How can there be such negligence to not have someone qualified to treat children traveling in such a large group, let alone a plane ill-equipped with the resources to do so? The place lit up with muttering and yelling as disgruntled parents shouted their distress and lack of satisfaction with the answers.

“We don’t think that’s good enough!” I screamed then looked to the crowd who all cheered in support, before I continued.  “A plane…without supplies? Don’t you think those kids could be dying?”, I blurted out, fuming. I wasn’t done yet, “AND you’re taking your sweet time getting help to them? There is nothing but ocean out there! How can they survive 3 whole days without search and rescue reaching them? Tell us…HOOOWW!?”

The more I challenged and barked at him, the rowdier the crowd got. He spat out “They are brave kids and our crew members would take good care of them I am sure. We are doing all we can to find them and getting them home I assure you.” Oh we felt nothing near assurance. Nearly 3 days and with a knowingly crashed plane in the ocean, they hadn’t expanded their search radius? Heck no! We were mad!

The pitiful and clearly ill prepared spokesman offered a “We don’t know what happened” as response, but that made nothing better as a mother screamed before bursting into a screeching wail “what if our children are out there alone?” My heart sank and I chimed in again – immediately “Yeah! What if the crew didn’t make it?” Anger was rising. You could cut the tension with a chainsaw.

“Well if the crew didn’t make it then lets pray for our children”, said the spokesman as he began clearing his papers from the podium. Faces looked up at him in disbelief. I screamed at him, saying “Brave has nothing to do with drowning or being eaten…..we wanna know how our kids can survive without help. We call for an expanse on the radius and MORE help! NOW!” A chant broke out from the crowd of hundreds, “MORE HELP NOW! MORE HELP NOW!”

“There will be no further questions!” The spokesman barely stated that as he stormed off in the midst of our objections. He was an elderly man, and his slow pace made it very easy to follow him. We all did. Hundreds of us. We didn’t let up, shouting for answers at him while he hobbled away.

A mother went before him to block the way as he was headed to the part of the airport only accessible by ID. She stood before him to keep him from leaving the conference, after all, we still had many unasked questions. Without hesitation, the spokesman pushed her out of his way, while shouting “We will keep you updated!”

The camera was right at the back of his head as he pushed past everyone then took off running towards the security door. We all ran too, following him. A mothers screamed “i need to know where my child is”, “TELL US ABOUT OUR KIDSSS! TELL USS!!! WE DEMAND ANSWERRSSSS!!!”

It was horrid. We were all struck by grief and desperation. A few of us got pushed back with force as he tried to escape our persistent questioning. And that he did! Right behind the security doors where we could not follow. 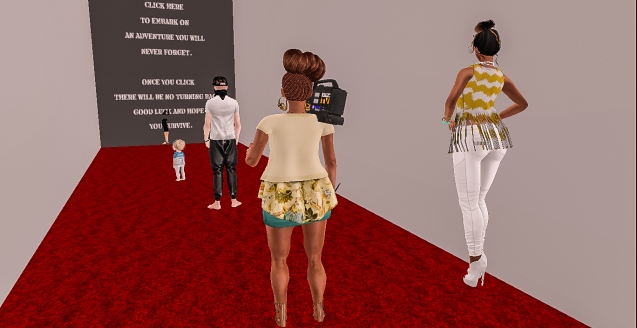 So now we still have no answers and we have to wait 24 more hours for them to increase their search radius? I say NO! Our kids are in danger every second they are out there in God knows where, in God knows what state. I’m calling for the area search to be increased now and more rescue efforts to be sent out immediately to save our kids.

((PS: Please this is all IC RP that supports the survivor camp RP adventure currently being organized by Richmond Elementary School and NGI Adoption Agency. Thankfully, this is not a RL tragedy and I pray no such thing ever happens. Amen))